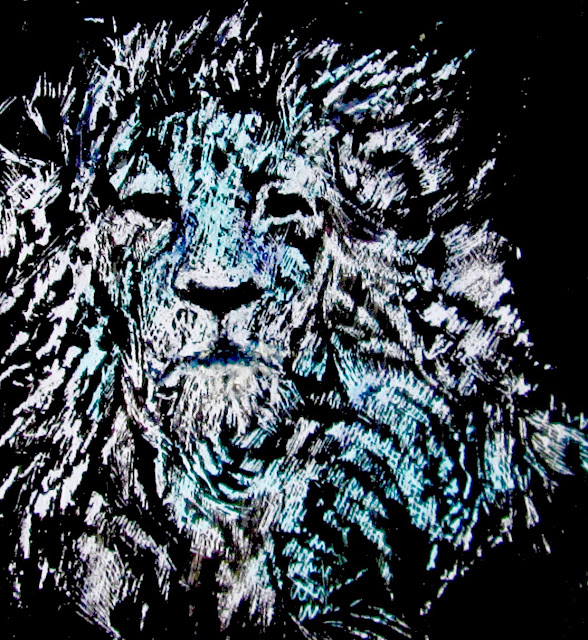 This piece was done using a technique learned from my former watercolor teacher, Shirley Hathaway.   Shirley also taught me how to batik.
I pulled out the crayons (regular children's crayons), scribbled some color onto a piece of mixed media paper and then covered the scribbles with black gesso.   (If I remember correctly, I was supposed to have used black acrylic paint, but I couldn't find any, so I painted with the gesso.)
Once everything was dry,  the gesso was gently scraped away with an X-ACTO knife in short strokes, and this lion appeared.
. . . . . . .
I picked up a couple of library books that look pretty interesting.    Both books are full of exercises designed to encourage experimentation.
It will be fun to pull out a few lessons per week from the books, and the books will help me make time for art while getting ready for the move.
at August 29, 2017 34 comments:

For those of us who occasionally feel like this in the middle of the day...

Hope everyone has a safe weekend, especially those in Hurricane Harvey's path (get out of the way!).

This morning, the new moon will pass between the sun and the earth over the continental U.S. and certain states will experience a total solar eclipse.  Our state of Oregon is one of the lucky ones.
The eclipse first hits the Pacific coast this morning & travels through Salem, Oregon which is about 60 miles north of where I live.

From our home in Eugene, we will see 99 percent totality at about 10:15AM.


Although over a million tourists have gathered in state parks to view the eclipse, we will stay home and enjoy the festivities with neighbors.
. . . . . . .

On another happy note, we placed an offer on a small house and the offer was accepted.
Our deadline for packing and moving to Washington state was August 31, but it looks like we're staying here a little longer.
We have a home inspection coming up this week, so we'll see how that goes.  Unfortunately, there is no studio space in this small house other than an extra bedroom, but that will do until we can build a simple workshop structure in the backyard in the Spring.  Or maybe that will just do.
Fingers crossed...

Here is a page from one of my journals using a glue gun stamp made earlier this week.

This particular journal is an "ideas"  journal.  It is used for inspiration and is filled with favorite color palettes, different types of composition, and project ideas.

I usually work in it on days like today, where it's hard to concentrate on a single piece of artwork.

Unfortunately, the offer we placed on a house earlier this week wasn't accepted.
Hope to find something this weekend.
at August 18, 2017 41 comments:

We have been really focused on finding a house soon.
Tim and I just made an offer on a place that is little more than a shell of a house (no flooring, no cabinets, sinks, bathrooms gutted).
It's a mess right now, but it would be fun installing things we like and are able to afford.  We will know if our offer has been accepted tomorrow night.

In the meantime, I painted the cheetah, and then
experimented with making stencils with a hot glue gun.
The hot glue was swirled on top of kitchen parchment paper.  While the glue was still hot, I placed another piece of parchment paper on top of it and flattened it with my hand.  When thoroughly cooled, the flattened stencils / stamps were easily peeled away from the paper.
The idea behind flattening the stencils is that they can later be attached to a piece of cardboard and used as stamps.
So that is something to look forward to.
Another positive thing is that I stumbled on the awesome site of artist Seth Apter called The Altered Page on the 10 year anniversary of his blog.  Seth was hosting a giveaway on that day, and I won a gift certificate to his online shop.  Happy days!  Thank you, Seth!
I will pick up one of his DVDs very soon & let you know how it goes.
at August 15, 2017 43 comments:

"All horses deserve, at least once in their lives, to be loved by a little girl."
Author Unknown
at August 07, 2017 53 comments: